An embodiment of nature and the feminine energy, “Nymphs” is perfect for immersing in the mood that Mariam Sitchinava crafts for her film photography.

Through imagery that combines nature, nostalgia, and femininity, Tblisi-based Mariam Sitchinava effectively shows us what makes film photography such a captivating medium. She divides her time between her daughter, work, spontaneous explorations, and film photography, all of which add to her creativity. But much of her work is also driven by daydreams — visions that shape the emotions and stories that we now see in her beautiful and dreamy photos. For those who are yet to familiarize themselves with Mariam and her artistry, we found just the perfect introduction in her Nymphs series, a collection of three sets that explore her interpretations of their mythological namesake.

As with the rest of her work, the series is full of feminine energy and moody colors, making it an exceptional example of the style that makes her one of today’s most inspiring film photographers. Nymphs, shot in medium format film using Contax 645, is especially noteworthy since it perfectly embodies Mariam’s style: portrait and fashion photography fueled by a passion for nature and women. Eager to share the series and also wanting to satisfy our curiosity about her, we recently asked her to tell us more about the ideas that brought this series to life, her own thoughts about her work, and her beginnings as a film photographer, among other things.

How did your film photography journey begin? How did the medium lead you to discover the kind of photography and imagery that you eventually settled on?

I’ve always been a daydreamer. There was a time in my life when I was obsessed with classic movies. At that time, my boyfriend gave me a present, and it became the first film camera that I owned. It was an old, entry-level, USSR-produced camera. Even though it broke almost every second during photo shoots and I was forced to fix it myself, I shot with it for 5 years.
The first film was special to me. The process of waiting for a film roll to develop when you don’t know what the result will be is exceptional.

Initially, I was taking photos of friends at that time. Shortly after, I got some offers and had several commercial projects within 6 months of shooting film. I quickly realized that this was the right thing for me and what I wanted to do in my life. It was very close to my nature and character as a person.

Everything comes from my inner self. It somehow went on its way to form the style and imagery I have today. Photography has helped me to translate my imagination and feelings visually.

How would you describe your work on a personal level? What do you consider to be the most important component or quality of your photography?

I would say my works are full of charm. It’s like a daydream but also sensual, feminine, a bit fragile, divine and natural. The main component is vision and my personal expression of harmony.

Your Nymphs sets are beautiful recreations of their mythical namesake. What inspired you to explore the theme for a portrait series? Which quality/ies of nymphs did you particularly want to depict in these sets?

Inspiration first came from a beautiful ballet performance. I was fascinated by the costumes of the dancers, especially the hats, that caught my eye. It was so captivating for me that I soon started to think of creating something with this influence. I wanted to capture the gauziness of these exquisite hats through my lens. I asked one of my friends, an illustrator, to help me sketch out the idea. We immediately matched the hat with a similarly delicate and sheer dress that was later tailored by hand. I loved the final sketch so much that I decided to shoot a triad of girls instead of one.

We were shooting only for 20 minutes when something bizarre happened once again. The sky was quickly covered by grey clouds and it started to hail heavily. We quickly left the place, but fortunately, I had my roll finished.

While we were heading home, an idea struck me: the girls had a supernatural and mystical power when they were together. I was love-struck by this notion instantly and decided to continue shooting them in different scenes. I chose the seasons as a theme for their gatherings.
I called the series Nymphs. The aesthetics and the magical beauty of the girls gave me an idea to associate them with the mythical creatures from Colchis, my homeland, where the Hesperides — nymphs of the evening and golden light of sunsets — were said to be living in a garden.

What is your creative process like, especially for themed shoots like the Nymphs series? Do you immerse yourself in details or do you let the mood you have in mind guide you?

First, I have raw frames in mind. For Nymphs, for example, we first made sketches with my idea. Something changes mostly at the time of shoot itself, so I try to let my mood do its thing as well.

Women and nature are central to your visual language. In what way/s do you think they intersect in the themes and ideas you explore in your work?

For me, they are a perfect combination. Together, they help me to use my imagination to transform my vision into pictures.

What do you consider to be the most crucial part of preparing for a shoot like the Nymphs series?

The team’s mood, concept, and light.

In what ways does film photography enrich your creative vision?

Whenever I look through the viewfinder, I see a very special frame with different emotions and colors. I think carefully about every shot and what makes it very meaningful. It’s very connected and close to me. My main sources of inspiration are classic movies and the mood of film photography is very similar to it.

Lastly, what advice would you share to those who want to shoot creative portraits using film?

If possible, work with the manuals first to understand how a camera works. Try not to copy other artists, but take inspiration from them instead. Don’t forget to maintain your individuality and vision.

Find out more about Mariam Sitchinava and her work by checking out her website and following her on Instagram. 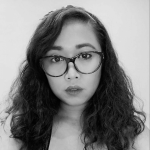 Whattaroll Journal: One With the Forest

Whattaroll Journal: The Film Cameras That Got Us On The Roll (Part 1)